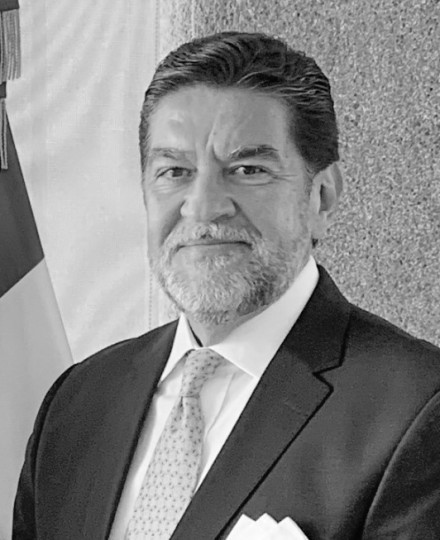 Ambassador Pérez Bravo is a Mexican career diplomat with 44 years of experience at the Ministry of Foreign Affairs (dating from February 1976). He was promoted to the rank of Ambassador at 33 years of age (June 1990). For the last 30 years, he has served as Ambassador of Mexico, accredited to 52 countries in Africa, Latin America, the Caribbean, Asia, Europe and Oceania.

In May 2019, the President of the United Mexican States appointed him Ambassador Extraordinary and Plenipotentiary of Mexico to New Zealand, with cross-accreditation to the Independent State of Samoa, the Kingdom of Tonga and Tuvalu. He presented his credentials to New Zealand’s Governor-General, Dame Patsy Reddy, at Government House in Wellington on 12 November 2019.

He is the author of three books: International Technical Cooperation; Panama: a Transition, and Made in Asia, and has written more than 40 articles on international issues.

Ambassador Pérez Bravo was born in Mexico City on December 30, 1956. He is married and has two children. He holds a degree in International Relations from the National Autonomous University of Mexico and has taken courses at both the School of Higher Studies in Geneva and Stockholm University.